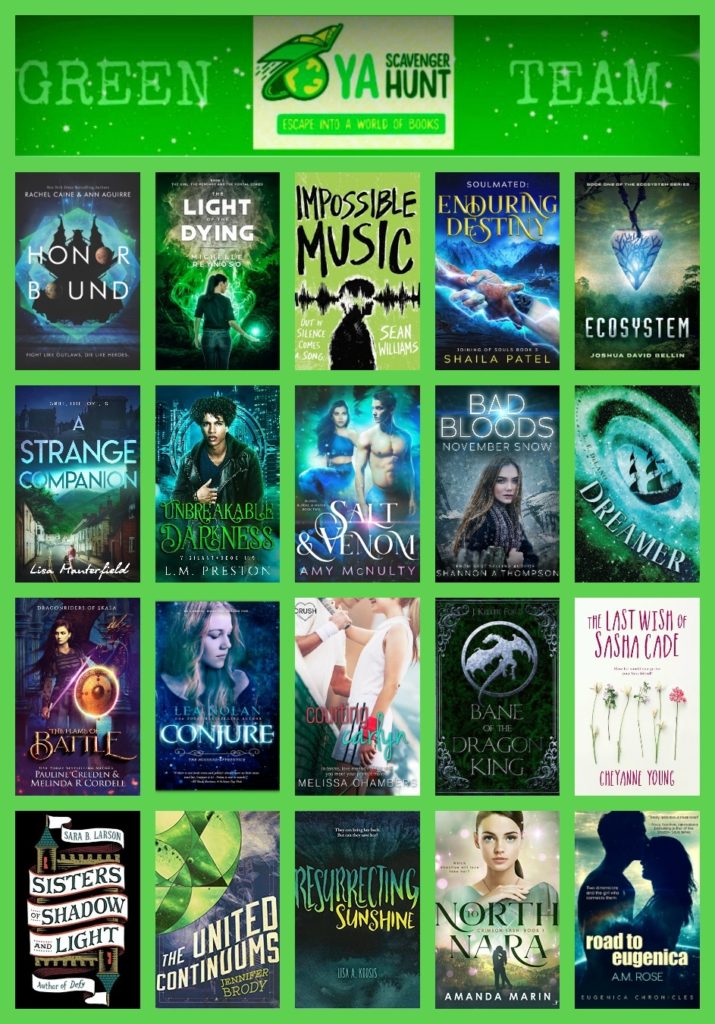 Welcome to YA Scavenger Hunt! At this hunt, you not only get access to exclusive content from each author, you also get a clue for the hunt. Add up the clues, and you can enter for our prize–one lucky winner will receive one book from each author on the hunt in my team! But play fast: this contest (and all the exclusive bonus material) will only be online for 72 hours!

AND BONUS! I’ve got an ADDITIONAL GIVEAWAY going on for my newsletter subscribers, new and existing (not old, never old!). More info on that at the bottom of the page, but back to the hunt…

There are FIVE contests going on simultaneously, and you can enter one or all! I am a part of the GREEN TEAM–-but there is also a RED, BLUE, GOLD, & PURPLE team for a chance to win a whole different set of books!

If you’d like to find out more about the hunt, see links to all the authors participating, and see the full list of prizes up for grabs, go to the YA Scavenger Hunt page.

SCAVENGER HUNT PUZZLE Directions: Below, you’ll notice that I’ve listed my favorite number (Psst! It’s at the bottom of this post under Now For The Hunt!). Collect the favorite numbers of all the authors on the GREEN TEAM, and then add them up (don’t worry, you can use a calculator!).   Entry Form: Once you’ve added up all the numbers, make sure you fill out the form here to officially qualify for the grand prize. Only entries that have the correct number will qualify.   Rules: Open internationally, anyone below the age of 18 should have a parent or guardian’s permission to enter. To be eligible for the grand prize, you must submit the completed entry form by April. 7th, at noon Pacific Time. Entries sent without the correct number or without contact information will not be considered.

NOW FOR THE GOOD STUFF…

Today, I am hosting L.E. Delano for the YA Scavenger Hunt!

L.E. DeLano is well known as a blogger and autism advocate under her alternate moniker, Ellie DeLano. She comes equipped with a “useless” Theatre degree that has opened doors for her in numerous ways. Though mostly raised in New Mexico, she now lives in Pennsylvania with two adventurous kids and two ridiculous cats. When she’s not writing (which is almost never), she’s binge-watching Netflix and planning road trips. Her debut novel, TRAVELER was selected as a Keystone To Reading Secondary Book Award finalist for school year 2018-19 by the Keystone State Reading Association (KSRA) and also voted one of The 20 Most Beautiful Books in the World for 2017 by MTV UK.

In this deleted scene from DREAMER, Jessa discovers that the alternate realities she normally visits are suddenly colliding and splintering all around her as a simple trip through the mirror to grab a slice of pizza turns into a nightmare . . .

My craving for great pizza sends me through the bathroom mirror to Greaverville, the name of Ardenville in this reality. My hand is pressed to the reflective chrome on the side of the shake machine, and one glance down at my apron and nametag tells me I’m working right now. I make a frustrated face. Great. I get to smell and see and serve pizza, but I won’t get to eat any until my break.

My misery is interrupted by the front door slamming open so hard it nearly shatters the glass. A half-dozen soldiers with guns at the ready head straight for my counter as I stare at them wide-eyed and open-mouthed. The memory surfaces, but slowly. Like it happened a very, very long time ago and I can only remember bits and pieces. Something about a war? And we’re…occupied?

That doesn’t seem right. None of that fits with the Greaverville I thought I knew in this reality. What changed? And when?

“We want three cheese pizzas and four pasta specials,” the sergeant says as his eyes scan the menu board behind me. I start ringing it up, but the barrel of the gun slides slowly over the top of the register.

“That’s no charge,” the soldier says.

“Don’t ring it up,” he says, over-enunciating each word like he’s talking to a three year old. My eyes finally snap up to meet his because he’s managed to irritate me.

“Hey!” One of the other soldiers pushes forward. “You giving us trouble?”

“No!” I hear my boss shouting as he comes up behind me.

“Pete, they think they’re getting the meal on the house,” I tell him. Pete looks at me in alarm and suddenly, he’s pushing me behind him.

“Of course it is!” His voice is too high-pitched, and he’s so ridiculously friendly I almost laugh. Pete is cranky even on his best day.

He puts his hand over my mouth. “Sorry about that,” Pete says to the sergeant. “She’s new. And if she keeps it up, she’s going to be unemployed.” He puts enough emphasis on that last word that I finally get the message. I give him a nod, and he slowly takes his hand away.

“Go ahead and take their order,” he jerks a thumb toward his own chest. “I’ll deliver it myself.”

“No.” The sergeant glances at me, and a smile touches his lips but doesn’t quite make it to his eyes. “She’ll wait on us. For as long as we need her to.”

“My shift is almost over,” I protest.

“It’s over when we’re ready to leave,” he says. His eyes slide over to Pete. “Isn’t that right, boss?”

Pete nods, and I realize I’m outnumbered. I need to get back, and I really shouldn’t be making this kind of trouble for my counterpart. This is what happens when you Travel without a plan.

“If you follow me, I’ll get you seated,” I say through gritted teeth as I grab a rag. I want to tell them off, but those guns aren’t toys. Something tells me they’re not done showing me who’s in charge, either.

“We’ll take those booths in the corner,” the lead soldier says, pointing. I follow the line of his finger and there’s a family seated in one of the booths. I take a deep breath and start over; glad to see the family is already scrambling to clear out. I wipe the table down and step back to get out of their way but I’m stopped as the sergeant grabs my arm.

“That’s better,” he says. “You just remember what you are. Got it?”

I can’t help it; the words are out before I can stop them. “What am I?”

He slides the barrel of the gun up under my chin and I can’t breathe. Stupid, stupid sarcastic mouth!

“Nothing.” He says it softly, but that somehow makes it even more menacing. “You’re nothing to me. That makes you expendable. Got it?”

I nod because I can’t speak. My mouth is suddenly dry and my throat is paralyzed.

“Now go fetch a couple of pitchers of beer. And we want our food on the table within the next five minutes. Understand?”

I nod again, and he lowers the gun so he can slide into the booth. I back away, and then I turn and walk as fast as I can into the kitchen, where I lean against one of the counters. Everyone’s bustling and I can hear Pete yelling at the cooks.

I grab a pizza pan from the dish rack and flip it over, staring at myself in the reflection. I put my fingertips to the surface, and I experience a brief, panicked moment when I realize I’m not going through–probably because of how badly my hand is shaking.

I focus again and my reflection and she and I have the same troubled look on our faces.

This thrilling sequel to TRAVELER doles out adventure and heartbreak in equal measure as it takes readers through a kaleidoscope of intricately crafted worlds of wonder, discovery, and danger.

You’re still you no matter where you go . . . Jessa has learned the hard way that traveling to alternate dimensions isn’t all delicious, glittering desserts and fancy parties: it also means accidentally running into people she thought she’d never see again. Still mourning a devastating loss, Jessa isn’t really prepared for the arrival of a reckless version of someone she once loved who is now bent on revenge. Add an increasingly complicated relationship with her best friend Ben, the reappearance of an old enemy, and the threat of the multiverse collapsing, and Jessa’s got a lot on her plate. She may be destined to help save an infinite multitude of worlds . . . but in the end, all Jessa really wants to do is save the people she loves.

NOW FOR THE SECRET NUMBER YOU NEED!

The secret number for Melissa Chambers is 24!

CONTINUE THE HUNT   To keep going on your quest for the hunt, you need to check out the next author, Lisa Manterfield HERE!

(Winner will be determined and contacted on 4/8/19. Click here for a list of sweepstakes rules.)   Thanks so much! And happy hunting!