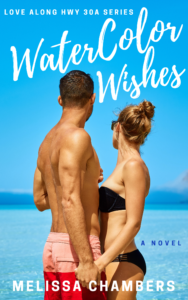 Marigold Appleton was made for the laid-back beach life of picturesque WaterColor, Florida. Unfortunately, her bank account was not. She’s about to lose her gift shop due to her hidden location. When the town which rarely allows hotels announces they are designating a plot of land for one, Marigold convinces her father to bid on the land and build one of his boutique hotels on it so she can move her shop into it. But also bidding on the same plot of land is property developer and insanely hunky Dane Knight. She’s got to keep her guard up, because his interest in her may be only to get her to drop her bid for the land. She just wishes he wasn’t the first guy in years to make her knees buckle.

For weeks, Dane has been trying to get the girl he met at the bonfire out of his brain. As she crystalizes in front of him at the bar of the WaterColor clubhouse, he knows his daydreams of her didn’t stack up to the real thing. But he just got out of a poisonous relationship. His ex has a bad habit of dropping her kids off without notice, and he’s too big of a sucker for them to say no. A relationship with Marigold is out of the question. But after he gives in to his weakness for her for the first time, he knows he’s never going to be able to get her out of his heart.

For three weeks Dane had been trying to get the girl from the bonfire out of his daydreams. Just as he was getting back to sanity, there she was, leaning against the bar with a glass of white wine and a smile that practically made his knees buckle. He’d convinced himself that he’d overblown in his own head his reaction to her that night. She was hot. So what. Plenty of girls were hot. But seeing her again now in the flesh and not a figment of his fantasies, he knew his initial reaction to her had been real.

Watching her from across the bonfire that night three weeks ago, kicked back in her beach chair talking to her friend, he’d never been so attracted to a woman. Blond hair in soft curls draping down her shoulders, big eyes that went up a little in the corners, and a sneaky smile like she knew something no one else on the planet knew.

“Damn,” Ethan said, waking him up.

Dane’s cheeks went hot. “No. I mean, we met briefly a few weeks ago.”

“Hang on. Is this bonfire girl?”

Dane jerked his head around to face his brother, and then he remembered that he’d broken down after a few drinks last weekend and blabbed to Ethan about the mystery girl he’d met at the bonfire. She wasn’t really a mystery. Her name was Marigold. He’d seared it into his memory when his buddy Chase had introduced them that night. He’d never known a girl with that name. He’d thought a marigold was a flower so he’d looked it up. He’d been that ridiculous.

“Will you stop that?” Dane said, trying to make himself smaller.

“I’m sure she doesn’t bite. And she’ll be interested. You’re the best-looking guy in this room.”

Dane gave his twin brother a look, and Ethan grinned back at him.

“Why not?” Ethan asked, and Dane just looked at him, eyebrows raised. “Oh, God. This again?” Ethan made no attempt to hide his disdain for Dane’s refusal to date, which pissed Dane off because Ethan of all people knew what he’d been through the past year.

“I’m not minimizing anything. I’m just trying to figure out what your game is here moving forward. Are you never going to date again?”

“There’s an easy solution to un-complicate it,” Ethan said. Dane frowned at his brother, and Ethan tossed up his hands. “I’m just saying.”

Marigold glanced at Dane, and then did a double-take. Her brows furrowed, and then a little smile spread across her lips, making his stomach flop like a fish. She held her glass up in greeting.

Ethan talked through his smile, teeth clenched. “Looks like she remembers you, huh?”

She glanced back and forth between Dane and Ethan, brow furrowed.

“Oh, okay,” Dane said with an eye roll at his brother. “Have at that.”

“You’re the worst actor. You get really loud.”

“I was a theater minor in college. We are trained to project.”

Dane shook his head at his brother.

Marigold stared at Dane unapologetically. She seemed to know he was the one of the two of them she’d met. They were identical, but Ethan, admittedly, was a little thinner and he dressed way better. He also made an effort with his hair. Dane usually couldn’t be bothered with messing too much with his own, but he was starting to wish he’d given his appearance some thought that evening. At least he was dressed up more than usual. They’d had an important meeting with investors who wanted to build a boutique hotel, which was also the reason he and Ethan were at that bar in that particular clubhouse.

“Why do you think she’s here?” Dane asked Ethan.

“Hmm, that sounds like a perfect question to ask her.”

Dane glanced around. “Do people hang out here after work or something?”

Ethan let out an exhausted sigh. “God, you are wearing me out.”

Dane’s stomach whirled as she headed toward them.

“Now here’s a woman I like. Takes matters into her own hands,” Ethan said. “You go, firewoman.”

Marigold pointed between the two of them. “I’ve met one of you.” She landed on Dane. “I’m pretty sure it’s you.”

“Not really. You two are obviously twins, but you’re different enough.”

Ethan held out his hand. “I’m Ethan. The gay one.”

“Ah,” she said. “Makes perfect sense. You’re way better-looking.” Ethan smiled in a way that told Dane he was really liking this girl. Join the club. She held out her hand to him. “Marigold.”

“You know my brother Dane from…”

“A mutual friend,” Marigold said. “Chase O’Neil. Do you know him?”

“We’ve met a handful of times. He’s kind of hard to forget, especially with his face plastered on real estate signs all along 30A.”

“True.” She met Dane’s gaze, and he wished he could think of something clever to say, but his tongue seemed to suddenly weigh a few hundred pounds.

She looked back at Ethan who tossed up his hands. “Well, look at my brother and me without cocktails. I’ll have to do something about that. Can I get you anything?”

She viewed her drink. “I’m probably good to hold at one since I haven’t had dinner yet. But thanks.”

Ethan nodded and headed toward the bar, leaving Dane standing there with the girl who’d been running through his imagination for weeks. She lifted an eyebrow at him. “I thought I was seeing double for a minute there, but then I remembered I was on my first drink.”

“Was I the in-focus one or the blurry one?”

She smiled and narrowed her gaze. “A little bit blurry, now that I think of it. That’s a good way to put it. Your brother’s sort of a sharper version of you, isn’t he?”

He huffed a laugh. “I guess I’ll have to concede to that. I have been at work all day though. Can I get a break?”

“Well, I guess so.” She pointed at him. “But you’re on notice.” Her smile gave him a dangerous glimmer of hope.

A loud whistle quieted the room, and Dane’s attention went to a guy standing in the doorway to a banquet room. “If you’re here for the meeting about lot number Z85K613 east of Seagrove, we’ll be starting in five minutes, so please come get seated.”

Marigold set her drink down. “Well, this is where I leave you.”

Dane blinked. “You’re in this meeting?”

“Yeah. Have you heard they’re allowing another boutique hotel on this plot of land?”

“My family’s in the business. We’re getting that bid.” She waggled her eyebrows with a smile, and then her expression turned as she studied him. “Hang on. Are you here for this meeting, too?”

Ethan sidled up beside him, clasping him on the shoulder. “I was just about to put in our drink order, too. We’ll have to save it for afterward.” He held out his hand to Marigold. “It was lovely to have met you. Maybe we can have a drink sometime. We can get your information from Chase?”

“Sure,” she said, eyeing the two of them warily.

Ethan headed toward the door, and Dane just sort of held up a hand in a wave as he followed his brother.

“Well,” Ethan said. “How did that go? Do you think you might have a shot?”

Dane considered the letter of intent in his briefcase from the client they just signed…the one they were there to represent this evening. “If we win the bid on this land, not likely.”