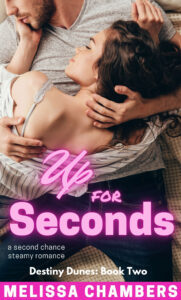 He won’t get in her head again…

Tori Jacobs has spent the past year moving on from her intense relationship with Jack Massey. His jealousy ruined them. They made no sense, anyway. He’s a stuffy, number-cruncher from a wealthy family, and she’s a hot mess from a place that would make his family clutch their pearls. Tori has worked too hard getting over him to turn back now. She’s thrown herself into her work with the kids at the resort and nurtured friendships with her wonderful co-workers. She even tried another relationship. Though Jack never left her head or her heart.

Jack Massey screwed up, and he’s paid the price. He quit drinking and became obsessed with his job and working out. He’s not so much as looked at another woman. Tori’s all he’s been able to focus on, even after a year. He wants her back, but it’s not going to be easy. They come from different worlds, and she makes sure he knows it at every turn. He’s never failed at anything in his life except for his relationship with her, and he doesn’t intend to lose at that again.

As I usher some kids in from the outside play area, handing them off to Chelsea, she grins at me and says, “Groups have been posted for the team-building weekend.”

My insides twist with equal parts hope and dread. “Cool,” I say, heading to the break room, keeping my indifferent front, always. But the truth is I haven’t been anything resembling cool for the better part of a year. Although being lumped into a group with Jack Massey for a weekend away would be detrimental to all the work I’ve done to get over him, there’s a part of me that I wrestle to the ground daily that would love to see his name in my group.

I’m putting coins in the soda machine, when Brett walks in. “They separated us again,” he says, going over to the water cooler.

“Of course they did. These weekends are about helping people get along. If you’re already doing that, their work here is done.”

I get my drink, and I’m almost out of the break room when he says, “But I did see who’s on your weekend.”

It’s all I can do to keep from putting my hand to my chest to slow my heartbeat. Instead, I turn to face my lifelong best friend, giving him a look like he’s the biggest idiot on the planet. “So?”

“Of course I’m okay. Nobody died. What about you? Is Kylie in your group?” Deflection is the name of my game.

He drops his chin. “No, but it’s okay. It’ll probably do us good to have a minute apart.”

“Why, so you can come up for air from all the sex you’ve been having?”

He waggles his eyebrows. “Pretty much. Seriously, it’s good for us to spend time apart. It’s healthy.”

“You just keep trying to convince yourself there, Romeo.” I head to my shared office and slide into the seat, pulling up the email. I want to get the particulars of this nightmare of a weekend I’m in for.

Every year Robert splits the whole staff of the resort into several groups. Each group takes a separate weekend and goes away to this camp where we do team-building exercises and that kind of bullshit. It’s all to help us work well together. He wants people from Kids Company like me to socialize with people from the business office, and people from the Circle, where all the restaurants and shopping are, to socialize with the spa workers and housekeepers. All of us are supposed to be this big, happy family of grinning idiots.

I find the list of names in my group, and there’s his. Jack Massey. We had a thing at the end of last summer. Maybe the word disaster is more fitting for what we had. Whatever it was, it destroyed me, and it takes every bit of willpower and acting abilities I have to pretend I’m cool with everything when I’m around him.

Voices down the hallway pique my interest, because it definitely sounds like Jack. He used to come over here any chance he got before we had our thing. Now he never shows his face at Kids Company.

As he gets closer, I’m able to confirm it’s him, and my stomach squeezes itself into a tiny little ball. I hear buzz words like award-winning and state-of-the-art and educational, and I know he’s got somebody important with him. As they pass by my office, the guy he’s with stops and smiles at me. “Hello, ma’am.” It’s the kind of greeting that only comes from a privileged, old, white guy, making sure he is gifting the lowly staff with his acknowledgment.

Jack is forced to stop, and he makes eye contact with me, sending my heart into a frenzy. “Senator, I’d like you to meet Tori Jacobs. She’s one of our recreational therapists.”

I stand up and walk around my desk. “Hello, sir.” I clasp my hands behind my back to make sure he knows he doesn’t need to shake my hand. I don’t like touching people I don’t know. I’ve adopted this technique to send a clear signal. The downside is most men take the opportunity to look at my boobs.

“So, what does a recreational therapist do, Miss Tori?” Miss Tori. Could he be more condescending? I give him my spiel about how we cater to kids with disabilities here, and how I work with their therapists back home to better serve them for the week. He nods, widening his eyes in all the appropriate spots. I look at Jack for next steps, but the senator beats him to it.

“Maybe Tori could show us the outdoor area, since this is her space and clearly not yours, young Jack.” The man looks Jack up and down, indicating his suit pants, button-down shirt, and tie. As much as I hate to admit it, I love the way he looks in a suit—like there’s nothing he can’t accomplish or fix.

Jack opens his mouth, gauging me, so I save his ass and step out into the hallway. “Of course. Right this way, Senator.” Janelle or Bailey usually handles the tours, being in PR, but this guy seems important, and I’m in no position to tell him no. I move into lovely hostess mode, trying not to be bothered by Jack, who I get off to most lonely nights, trailing feet behind me.

After I’ve shown the senator our entire facility and answered a million questions, we’ve circled back to my office. Robert comes slow jogging down the hallway, getting all of our attention. “I’m so sorry I was caught up. I got here as soon as I could.”

“It’s no problem,” the senator says. “Jack and the lovely Tori have been taking very good care of me.” The man gives me a smile that teeters on creepy.

“That’s great. Is there anything else left to see in this building?” Robert asks.

Dismissed of our duties, Jack and I watch them walk down the hall. With every step they take, the tension between us thickens.

Jack is the first to speak. “I’m not sure if he was really nice or interested in you.”

I glance down at my boobs in my V-neck T-shirt. “Really, you’re not sure?” I turn from him and head to my office. He follows me inside, but he doesn’t say anything, so I say, “Why was that guy here, anyway?”

“Robert’s hoping to get government funding for our outreach program. It’s a long shot.”

“I saw that you and I are on the same team-building weekend.”

“Yeah. Is that gonna be weird or anything?”

“Why would it be weird?” I ask, typing nonsense into the computer.

I shrug as if I couldn’t give the exact day and hour count since it all ended. “You’re the big man on campus. I’m sure it wouldn’t take you much to get one of us switched.”

“Nope.” He grips the door, and I imagine the muscles in his forearm working under that sleeve.

“Then I guess I’ll see you next weekend,” I say.

“Guess so.” He leaves, and I let out a huge sigh, closing my eyes. “I forgot to tell you.”

I perk up and see he’s back in the doorway, dammit. “Yeah?”

“I didn’t look at your chest in that shirt once.” He heads out, and I grit my teeth, having no idea how this man has the power to crank my body temperature up to scalding.