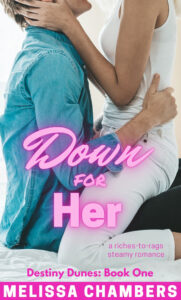 From champagne to salt water…

Walking into her new employee housing unit at Destiny Dunes resort, the last thing Kylie McBride expects to see is a dripping wet naked guy. Turns out the unit was double-booked. All Kylie wants is to take her glorious new job as pool girl and prove to herself that she doesn’t need to go crawling back to her two-timing ex or her controlling dad. But with only twenty bucks to her name, no credit cards, and no place to live, she’s as good as fish bait. With the hunky, now-clothed Brett offering his bed for the weekend, she might have a reprieve. She just needs to keep the resort’s biggest player out of her heart.

Occupational Therapist Brett Hargrove may spend his days working with kids, but his nights and weekends are dedicated to charming the ladies…and to helping his mom care for his sick grandmother. The last thing he’s looking for is a relationship, until a housing mix-up has the captivating Kylie standing in his living room with her suitcases. His life is not set up for a girlfriend—that’s bitten him in the ass before. He’s got to stay strong and make sure Kylie understands his heart is off limits. Otherwise, this thing between them is certain to detonate.

As I open the car door to step into my new life, a wall of heat thrusts itself onto me. I could hold out a cup in this dense Florida humidity for a few minutes and have a full glass of liquid. But the weather is the least complicated obstacle I have to overcome.

As I shoulder the bag that has ridden shotgun beside me since I left Oklahoma yesterday, a guy among some twentysomethings on the porch of the identical housing unit beside the one I’ve been assigned gives a catcall. “Hey, blondie, screw them, come see us. We’ve got beer.”

I wonder what he means by them? I only have one roommate. Val is her name, according to the girl who checked me in at the Destiny Dunes housing office.

As I slip in the key card and step into my new home, the distinct smell of burnt rice assaults my nostrils and turns my grin into a grimace. At least three days’ worth of dirty plates with caked-on goo litter the glass coffee table, and long tube socks drape across the faux-leather recliner. Dang, Val. I’m not the biggest clean freak on the planet, but even I have standards.

Those socks are humongous. A pair of super-sized sneakers topples over one another beside the recliner. Either she’s got really big feet or her boyfriend is here. I hope he’s not an asshole. That’s my cynicism talking. But I have a right to be cynical about men right now.

Val must be home, because I hear the shower running. I start to walk into the kitchen, but something scurrying sends me stumbling backward. Even though I have a total of twenty-four dollars and sixty-four cents to my name, I’ll most definitely be investing a portion of that into some sort of humane mousetrap.

I hear the shower turn off. “Dammit, Val,” comes a guy’s Southern drawl. “If you take my towel one more time, I’m gonna whip your ass.”

I stiffen. If this is Val’s boyfriend, I need to have a talk with her, because he’s an ass.

“I don’t suppose you’ve done any laundry either?” says the guy. Steps sound down the hallway, and then I hear what sounds like the opening of a dryer door. “Empty, of course.” The dryer door closes, and then footsteps come my way. “You were here all damn day and you couldn’t have—” The guy freezes in place as he catches sight of me.

Water drips down a six-pack of abs before my eyes. Words and phrases swirl around my brain, but my tongue doesn’t seem to be working. I try desperately not to look farther south, but it’s like being told not to scratch an itch.

He smooths his wet hair back, the muscles in his forearms and biceps colliding. “Can I help you?”

I look down, because boy, could he.

Bad Kylie. We will be having none of that. I am here to take my glorious job as pool girl and figure out my life. The last thing I need right now is another man. “You could start by putting on some clothes, please.”

He gives me a lopsided grin that takes him from everyday hunk to full-on swoony heartbreaker. “No one’s forcing you to look.” He heads toward the kitchen, giving me a blessed view of two very scrumptious ass cheeks. “If you’re looking for Val, he’s in his bedroom.”

His bedroom? Housing roomed me with a guy? I’m as progressive as the next person, but this seems a bit assuming. I hear the sound of kitchen drawers opening and closing. “Dammit. Are you serious?”

Stepping toward the kitchen, I peek in to find him rubbing a kitchen washcloth over his head and then across his shoulder and down his arm. I jog myself awake from my trance. “And who are you?”

I look away, feeling busted for staring. “You’re a friend of Val’s?”

“Not at the moment. Ask me later, when I’m dry and this air-conditioning isn’t blowing on my wet ass.”

I rub my temple. “Okay, listen, I don’t mean to be a bitch or anything, but we’re going to have to lay down some ground rules.”

He stops drying his chest and gives me the side-eye. “Ground rules?”

“I’m not sure why Housing has placed me with a man. I’m a forward thinker, so I will learn to get used to that if I must. But what I don’t have to get used to is naked men walking around my home—at least ones who don’t live here.”

He narrows his gaze at me. “Who are you?”

I put my hands on my hips. “I am Val’s new roommate.” I lift my eyebrows in expectation of an apology.

He rests his naked ass against the counter, covering his junk with the washrag. “Who told you that you were Val’s new roommate?”

“All right. I don’t know what the hell’s going on, but let me get some clothes on and we’ll go down to Housing and get this straightened out.”

He moves past me and heads down the hallway. I follow him, trying to keep my gaze from his ass, but damn. “I’m sorry, what needs to be straightened out?”

He raps on a bedroom door. “Val,” he says, and then opens it to find it empty. “Son of a bitch. He must have gone on down to the beach, which is why he took my damn towel.” He goes into a bedroom and opens a dresser drawer, pulling out a pair of boxer briefs like he lives here or something. “They’ve assigned you to a housing unit that already has two people assigned to it.”

I shift my weight from one leg to another, my mind searching everywhere for a nugget of knowledge that would help this make sense. “What?”

He opens his arms wide, the muscles in his biceps bulging. “This is my room. I’m Val’s roommate.”

I glance down the hallway at the number of doors, knowing the answer to my next question before I ask it. “Are there three bedrooms?”

“Nope,” he says, pulling a pair of shorts up his legs.

I take a deep breath. “I’ll just go back down to Housing and let them know they gave me the wrong key card or the wrong unit number or whatever.”

“Did you use that key card to get into this unit?”

“Then it looks like somebody down there messed up.”

“But Lauren told me that my roommate’s name was Val.”

He pulls a T-shirt over his head. “Therein lies the problem. When did you interview for your job here?”

“Last week.” I cross my arms over my chest, lifting my chin. “Why?”

He sits on the bed, putting on his shoes. “Didn’t you need to give a two-week notice at your current job?”

“What job did you take here?”

Frustration mounts in my chest. “Shouldn’t we be getting down to Housing?”

He grabs a phone off the dresser and peers at it. “Shit.”

“It’s after five. I hope they’re not closed.”

“Maybe someone’s still there,” I say, but in my heart, I know it’s not true. Lauren was the only one in sight when I was there a few minutes ago, and she said she was going to be out of there as soon as she was done with me.

He picks up his keys. “Let’s hope so. If not, you might need to find somewhere else to stay tonight.”

“I don’t have anywhere else to stay tonight,” I say, the volume in my tone rising.

“What about a friend or something?”

I rub my temple, my chest tightening. “You’re the only person I know here.”

He lowers his chin, his hazel eyes bearing into mine. “You don’t know me.”

“Come on. Let’s just go and see if anyone’s there.”

I follow him down the hallway, my heart on pins and needles, because unless I can find a hotel room for about ten dollars, I’m completely sunk.